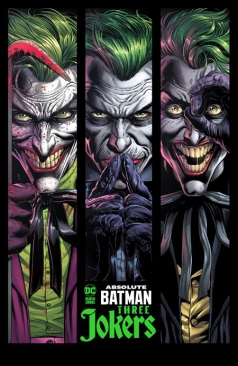 Batman doesn't understand how or why, but the fact is certain: the man he has spent a lifetime chasing isn't one man at all. There are three Jokers. Now that he knows the unbelievable truth, Bruce needs real answers. Joined by Barbara Gordon and Jason Todd, two former victims of The Joker's brutality, the Dark Knight is finally on a path to defeat the madman once and for all. Every last one of him. Geoff Johns (Doomsday Clock, Batman: Earth One) and Jason Fabok (Justice League: The Darkseid War) reunite to present one of the most overwhelming comics events in years. Collects Batman: Three Jokers issues #1-3 in the stunning Absolute Edition format.