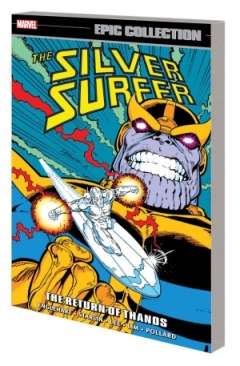 Kree-Skrull War II! The Silver Surfer has been manipulated into joining the conflict between the Kree and the Skrulls, and now his homeworld of Zenn-La has become a target! What sacrifice must Norrin Radd make to protect his people? As the war becomes ever more complex, Shalla-Bal learns that one side has a traitor in its midst! Both empires are being manipulated by outside forces, but can the Surfer discover the truth before the bloodshed gets any worse? Then, to correct what she sees as 'the great imbalance,' Death has resurrected Thanos of Titan - and he means to kill half of all living beings in the universe! Can the Surfer dissuade Thanos from this grim task, or will Drax the Destroyer and the Impossible Man get in the way? Collecting SILVER SURFER (1987) #24-38 and SILVER SURFER: THE ENSLAVERS.