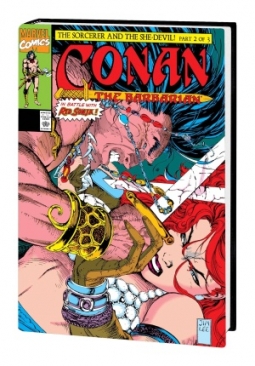 Roy Thomas is back! The writer who made Robert E. Howard's CONAN THE BARBARIAN one of the most popular and influential comics in Marvel history returned to close out the series' record-setting original run! With artist collaborators MICHAEL Docherty and Gary Hartle, Thomas charted a path for Conan that took him from the shores of the Western Sea to the top of the Mount of Crom, from the desert lands fringing the Vilayet Sea to the deadly forests of the Pictish wilderness, reconnecting with the classic legacy of Howard but also bringing in contemporary additions to the Conan mythos like the Devourer of Souls, the sword-thief Isparana and Varnae, First Lord of Vampires - as well as old favorites Red Sonja and Zula! Collecting CONAN THE BARBARIAN (1970) #241-275 and material from WHAT THE-?! #12. Rated T+