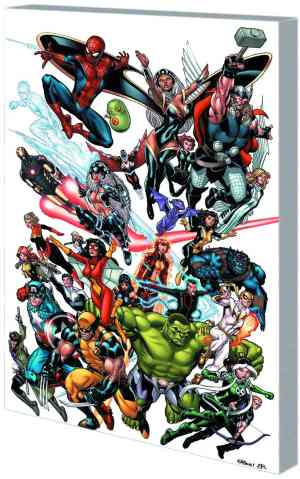 Spinning out of AVX, this all-star anthology brings you Avengers and X-Men action by the industry's top creators! It's time-travel aplenty when a WWII-era Captain America meets Cable, and Red Hulk and Wolverine face a future menace! Black Widow and Rogue fight Sentinels, while Iron Man, Kitty Pryde and Lockheed battle the Brood! Storm and Black Panther have their first post-AVX encounter, Gambit and Hawkeye join forces to save lives, and Spider-Man and Beast take on zombies! And while Cap mentors Jean Grey School problem student Quentin Quire, Iron Man and Beast butt heads, Iron Fist and Doop's first adventure is revealed, Captain Marvel fights alongside Wolverine - and Loki and Mr. Sinister team up! (You didn't think the heroes would have all the fun, did you?) A plus X adds up to awesome adventure...NOW! Collecting A+X #1-6.