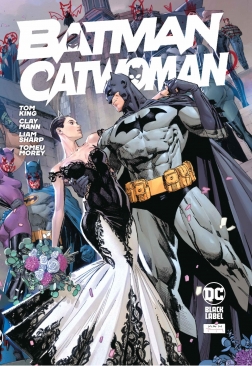 The Bat and the Cat's past, present, and future collide in this thrilling, romantic epic! This sweeping tale is told across three timelines: the past, when Batman and Catwoman first fell in love; the present, where one of Batman's lost loves (Andrea Beaumont, a.k.a Phantasm) resurfaces; and the future, where the couple have a happy legacy--their daughter Helena, the Batwoman. But at every stage of their relationship, Bruce and Selina have an unwelcome chaperone: The Joker! Collects the entire series, Batman/Catwoman #1-12, plus the Batman/Catwoman Special, along with Batman Annual #2, Catwoman 80th Anniversary 100-Page Super Spectacular #1, and Detective Comics #1027. This direct market exclusive variant features a special edition acetate cover highlighting the iconic cover created for Batman/Catwoman #12.