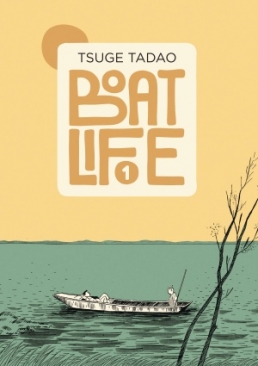 Serialized between 1996 and 2000, Boat Life stars novelist Tsuda Kenta, a lightly veiled stand-in for the artist, Tsuge Tadao, himself, as he pursues a life of reprieve and reverie on a small, makeshift house boat on a river outside of Tokyo. Based loosely on the artist's own daily life, this charming story follows the hapless protagonist on a series of magical absurdist quests, featuring a panoply of personable characters, including a drunkard fisherman, a pervy monk, a talking corpse, a senile hermit, and a half-supportive, half-doubtful wife and adult son. Most of the scenes take place on the Tonegawa River in Chiba, a favorite fishing spot of Tsuge's. Others occur at the artist's home or at Joker, a jeans and apparel shop the Tsuges opened in 1977. While fans of Trash Market and Slum Wolf will enjoy this late-career elaboration of après-guerre themes Tsuge has been exploring since his debut in the legendary alt-manga magazine Garo in the late '60s, fans of his brother Tsuge Yoshiharu's The Man Without Talent will appreciate the more relaxed and optimistic take on middle-aged reclusion and the grind of work and family.