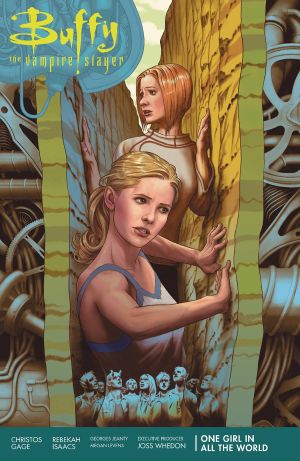 As residents, it didn't take long for Buffy, Willow, and Spike to find that there was something more behind the internment of the magical population in the government's "Safe Zone" in the Grand Canyon. So when release becomes possible, Buffy and Willow grasp the opportunity despite the incredible risks they will be taking: relinquishing their magic and becoming "normal" humans, and . . . leaving Spike behind. The pair reunite with Dawn, Xander, Riley and Sam Finn, and the Slayer Faith. When Buffy reveals to the crew that the true purpose of the camp is to bring about the elimination of all supernatural powers worldwide, the Scoobies begin their mission. They will manufacture a great escape from the camp and follow the obscure trail of the Big Bad to its end. Extraordinarily, the trail seems to lead higher and higher in the ranks of the US government . . .