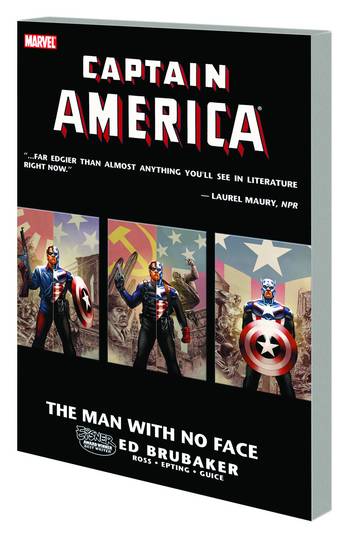 
With the Red Skull-fomented chaos borne from the death of Steve Rogers behind him, Bucky Barnes faces his future as the new Captain America. It's a future full of possibility as the hero emblematic of America's most cherished ideals and hopes. But Bucky is a man weighed down by a past as murderous as any bad guy the first - and in many Americans minds, the only - Captain America ever faced. And it is this weight that might crush the soul of the hero finally emerging out of the shadows and into the light. Brought to you by writer Ed Brubaker, the man who revived CAPTAIN AMERICA into an award-winning and headline-grabbing tour de force, CAPTAIN AMERICA: THE MAN WITH NO FACE follows the new Cap as he fights against a pair of deadly foes - one a well-known member of the classic Cap rogues' gallery and the other a reality-bending villain with a lust for revenge against Bucky's former self as the Winter Soldier. Collecting CAPTAIN AMERICA #43-48.