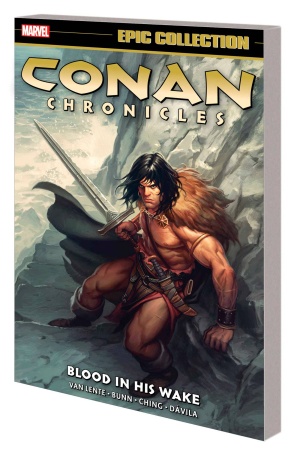 Conan's chronicles conclude! When the beloved queen of Khauran is secretly replaced by the evil witch Salome, only one man sees through the deception: Conan, captain of Khauran's royal guard! But can Conan stand against Salome's villainous ally Constantius and his mighty mercenary army? Conan will be crucified and left for dead - but he shall have his vengeance! Then, a new saga begins as Conan stumbles into a camp of Kozak raiders alone, unarmed and half-dead. With a band of Turanian hunters in hot pursuit, the barbarian may find a new ally in the Kozaki chief - but what about the chief's sons? And as the Turanians plot to end Conan's life, a Nemedian princess lures him to the remote island of Xapur - where lurks the monstrous Devil in Iron! Collecting CONAN THE AVENGER #20-25 and CONAN THE SLAYER #1-12.