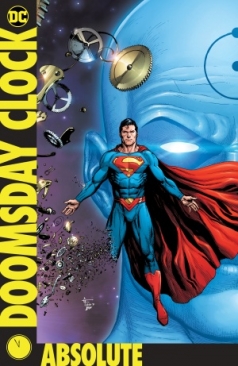 It’s the story you never thought you’d see! Dr. Manhattan, a near-omnipotent being from the Watchmen universe, has been using his powers to rewrite the DCU—reshaping some heroes’ histories, erasing other heroes altogether, and playing with the fates of the good and evil alike. But what does a godlike being from another world stand to gain from the DC Universe? And now that our heroes know who’s been toying with their lives, can they stop him? Collecting the full 12-issue miniseries in one oversize hardcover slipcase, this new edition also features dozens of pages of behind-the-scenes features, including never-before-seen sketches by Gary Frank.