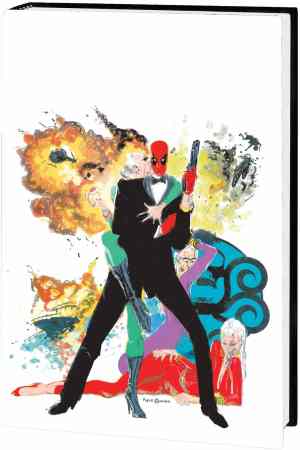 David Lapham (Stray Bullets, Young Liars) and Eisner Award-winner Kyle Baker (TRUTH: RED WHITE AND BLACK, Plastic Man) unleash their own special brand of crazy as DEADPOOL MAX returns! Deadpool and Bob try to stop a shadowy government conspiracy - and totally futz it up. Now, accused of killing a quarter of a million people, they are the world's most wanted terrorists - and Deadpool's ex-girlfriend Crazy Inez is on their tail! Find out how the puzzle pieces fit together as Deadpool, Hydra Bob, Cable and Taskmaster team up to take down the shadow group that's running the country. Plus: Deadpool and Bob spend their holiday break faking their own deaths, breaking into CIA headquarters, hunting down Internet-porn-peddling jihadists and causing a riot in an insane asylum! Collecting DEADPOOL MAX 2 #1-6 and DEADPOOL MAX X-MAS SPECIAL.