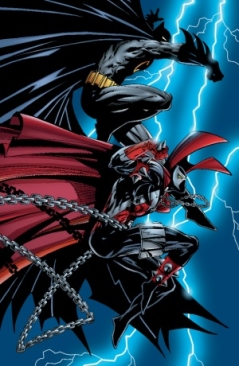 Two of comics' darkest characters cross paths again in the most anticipated comics event of the decade! Batman and Spawn are two vigilantes of the night who avenge the innocent by their own methods. When sinister forces manipulate the Dark Knight and the Hellspawn into confronting each other, you can bet that there'll be hell to pay when our heroes discover the truth and turn the tables on their would-be puppeteers. This deluxe edition of the blockbuster event features the 2022 Batman/Spawn one-shot; 1994's Batman/Spawn: War Devil #1 and Spawn/Batman #1; and a gallery of behind-the-scenes art from the new story and the original tales from the '90s.