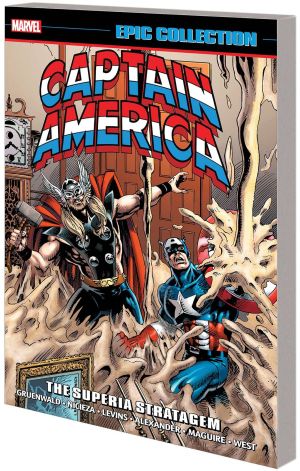 Hell hath no fury! Captain America faces a threat like never before when Superia raises an army of female super villains - from Anaconda to M.O.D.A.M.! The roguish gun-for-hire Paladin lends Cap a hand, but can these two mismatched adventurers thwart Superia's stratagem? Then, Cap comes face-to-face with his German counterpart, Hauptmann Deutschland. Both men are after the Red Skull - until they discover he's been killed by Scourge! But nothing is ever as it seems with the Skull. Plus: Diamondback seeks a quiet life - as Cap's executive secretary?! Bernie Rosenthal returns! Cap takes on Crossbones, Viper, Taskmaster, Jack O'Lantern, Doughboy and more! And journey back to World War II for a fresh look at the origin and earliest adventures of Captain America and Bucky! Collecting CAPTAIN AMERICA (1968) #387-397 and ADVENTURES OF CAPTAIN AMERICA #1-4.