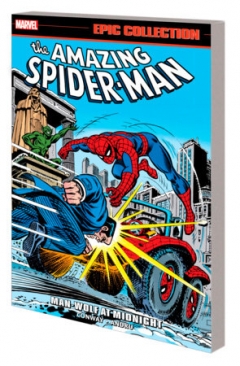 There's no questioning it, Peter Parker has never had it easy. But when the Parker luck is in full effect, you know it means epic Spider-Man adventures! A new era of villains keeps the bad luck streak alive when Col. John Jameson is marked by the werewolf's curse - becoming the Man-Wolf! Meanwhile, Peter Parker's best friend, Harry Osborn, descends into madness, paranoia and a certain green costume! The Punisher raises the tension even higher in his first appearance, while the nefarious Jackal draws up schemes that will forever change the web-slinger's life! Also featuring the introduction of the hilarious Human Torch-built Spider-Mobile, the shocking wedding of Aunt May and Doctor Octopus, the Tarantula, Mysterio and more! Collecting AMAZING SPIDER-MAN (1963) #124-142 and GIANT-SIZE SUPER-HEROES #1.