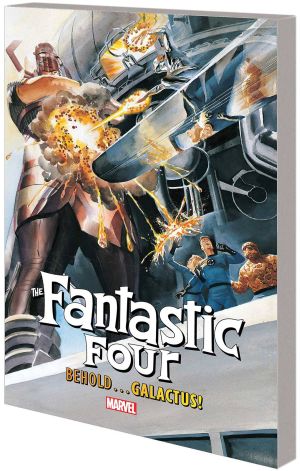 The Fantastic Four take on Galactus in a quartet of action-packed epics! First, Stan Lee and Jack Kirby introduce the World-Eater and his enigmatic herald, the Silver Surfer, as they come for Earth in one of the greatest comic book sagas ever told! Next, Stan and Jack bring big G back - but what does he want this time? The answer lies in a dangerous and deadly shrunken realm! John Buscema's powerful pencils illustrate the arrival of new herald Gabriel the Air-Walker, signaling doom for the human race! Then, John Byrne takes over as Terrax leads the Devourer back to Earth - and the entire Marvel Universe pitches in to help the FF save the planet from becoming his next meal! With classic art by top-flight creators, Galactus has never looked this good! COLLECTING: FANTASTIC FOUR (1961) #48-50, #120-123, #242-244