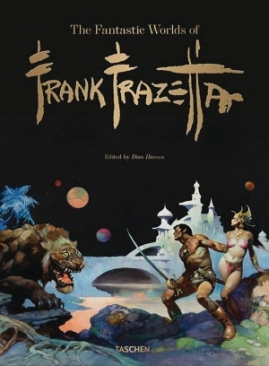 Frank Frazetta has reigned as the undisputed lord of fantasy art for 50 years, his fame only growing in the 10 years since his death. With his paintings now breaking auction records (Egyptian Queen sold for $ 5.4 million in 2019) he's long overdue for this ultimate monograph. Born to a Sicilian immigrant family in Brooklyn, 1928, Frazetta was a minor league athlete, petty criminal and serial seducer with movie star looks and phenomenal talent. He claimed to only make art when there was nothing better to do - he preferred playing baseball - yet began his professional career in comics at age 16. Strip work led him to the infamous EC Comics, then to oils for Tarzan and Conan pulp covers. Both characters were interpreted by many before him, but as he explained in the 1970s, 'I'm very physical minded. In Brooklyn, I knew Conan, I knew guys just like him,' and he used this first-hand knowledge of muscle and macho to redefine fantasy heroes as more massive, more menacing, more testosterone-fueled than anything seen before. As counterbalance he created a new breed of women, nude as censorship allowed, with pixie faces and multiparous bodies: thick thighed, heavy buttocked, breasts cantilevered out to there, yet still, with their soft bellies and hints of cellulite, believably real. Add in the action, the creatures, the twilit worlds of haunting shadow and Frazetta's art is addictive as potato chips. This monograph is the biggest and most complete ever produced on the artist, done in collaboration with the Frazetta family and with top collectors.