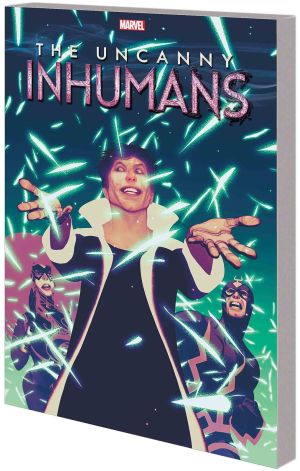 In the depths of Black Bolt's Quiet Room, the daughters of the fallen Inhuman Auran plot a desperate attempt to resurrect her. They are determined to reunite their family, even if means the fall of the entire Inhuman race! The cost of cheating death is high, and all of New Attilan will pay it! Then, a long simmering conflict turns into outright war -- it's the Inhumans vs. the X-Men! The mutants will be fierce foes, because they're fighting for their very lives! Who is the Inhumans' only hope for salvation? Why, Maximus the Mad, of course! He could stop the war - but where would be the fun in that? Charles Soule bring his epic saga to an end with a story that will leave the Inhumans forever changed!  Collecting UNCANNY INHUMANS #15-20.