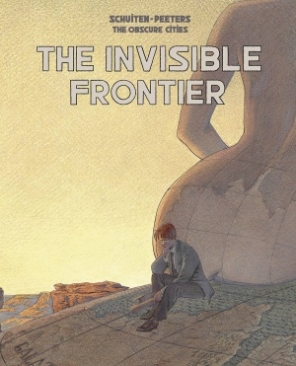 Uncover the strange magic of The Obscure Cities and be awed by the beautiful art and incredible storytelling! Features a new English translation of the classic graphic novel. Roland de Cremer is a young man who has just been assigned to the Center of Cartography in Sodrovno-Voldachia. It's a secluded place that is usually insulated from the outside world. But something is happening out there. Rumors swirl of attacks, assassinations, war, and rebellions bloodily put down. Meanwhile, Roland has fallen in love with a young woman named Shkodra, who the authorities have also shown an increased interest in. She has mysterious markings on her back, tattoos that look like a map. As the threat to her increases, the two flee through deserts, mountains, and swamps. They have only one option for escape: to cross the border. But will they be able to find their way through this land that bears no resemblance to the maps Roland is familiar with and will his desire to save her get them both killed? First published in English in 2002, this new edition of the classic European graphic novel makes the critically acclaimed series accessible to a new generation of readers!