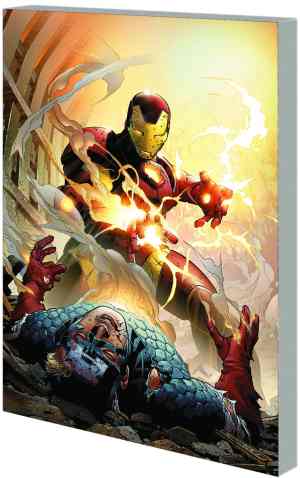 Wing-head and Shell-head! In different costumes and suits of armor, Captain America, the Living Legend of World War II, and Iron Man, the Armored Avenger, are friends through and through! Now, see some of the greatest team-ups these longtime allies have had through the years - including their deadly battles against the Chameleon, Batroc the Leaper, the Fixer, mind-controlling aliens, Firebrand and a group of deadly terrorists with ties to both their origins! Guest-starring Giant-Man, the Wasp, Jim Rhodes, and S.H.I.E.L.D.'s very own Nick Fury and Dum-Dum Dugan! Collecting TALES OF SUSPENSE #58, IRON MAN #172 & #228, CAPTAIN AMERICA #341, TALES OF SUSPENSE #1 (1995), IRON MAN/CAPTAIN AMERICA ANNUAL '98 and material from CAPTAIN AMERICA: SENTINEL OF LIBERTY #5-6.