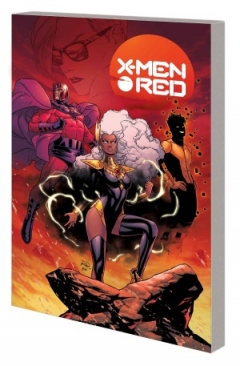 Who can save the red planet? The mutants of Arakko spent millennia scarred by war - but on the world once called Mars, they're learning to live in peace. Storm knows something greater than a queen is needed to keep this fragile new world together - but while she has a broken Magneto in her corner, Roberto Da Costa is making his own moves. Abigail Brand of S.W.O.R.D. has other plans to influence Arakko, with an unstable Vulcan on her side and Cable keeping his own secrets! And what of the ruthless Tarn the Uncaring, who now sits on the planet's ruling council? As machinations and revelations rock the red planet, the clock ticks down to interstellar war - and judgment day is coming. It's a new world full of intrigue, and someone has to fight for it! Collecting X-MEN RED (2022) #1-5. Rated T+