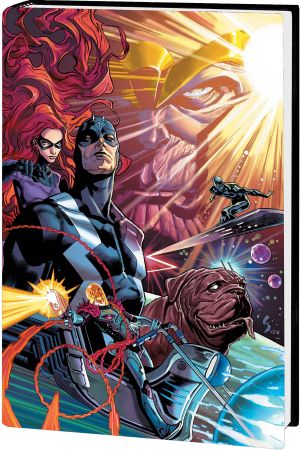 Blockbuster writer Donny Cates (VENOM, GUARDIANS OF THE GALAXY, THOR) unleashes cosmic chaos! Ask the galaxy's most powerful beings how they fear the universe will end, and they will answer with two words: "Thanos wins." Now, that disturbing thought becomes a horrific reality! Meanwhile, the Kree have targeted the Inhumans for annihilation, and Black Bolt must lead the few survivors into one final, bloody battle. In the future, Frank Castle has been transformed into the Cosmic Ghost Rider! And now this bizarre hero has plans for vengeance on Thanos himself! And when the Silver Surfer is lost in space and time, his struggle to survive will leave him changed forever! Collecting THANOS (2016) #13-18, DEATH OF THE INHUMANS #1-5, COSMIC GHOST RIDER #1-5, SILVER SURFER: BLACK #1-5, THANOS ANNUAL (2018) #1 and THANOS: LEGACY (A Story).