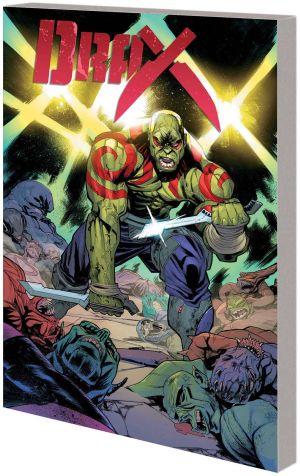 You know him as the heavily tattooed muscle for everybody's favorite spacefaring super-team, but what does Drax do when he's not Guarding the Galaxy? Pursue his own bloodthirsty quest to achieve his destiny and slay Thanos, of course! Determined to find and kill the Titan once and for all, Drax is ready to take on the universe, one heavy hitter at a time! When Drax the Destroyer and Terrax the Tamer walk into a space cantina, it's no joke. Then there's the Temple of Foom! Fin Fang Foom, that is. But you know Drax's motto: The bigger they are, the harder they die screaming. It's Drax the Destroyer, rampaging through the cosmos on a starship named the Space Sucker. You just know, whatever happens, this one is gonna be epic! Collecting DRAX #1-5.