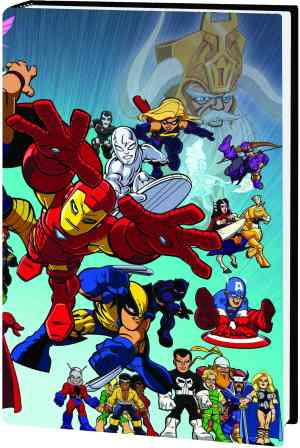 The greatest cartoon in the history of cartoons! Coming to a moving television screen near you!!!!...but until it does, why not try out the non-moving paper version? It's just as good, but without all that pesky listening. C'mon down to SUPER HERO CITY and join IRON MAN, HULK, WOLVERINE, CAPTAIN AMERICA, SILVER SURFER, THOR and waaaaaaay more-more-more, as they battle DR. DOOM and his masters of evil for control of the SUPER-powerful Infinity Fractals! Collecting MARVEL SUPER HERO SQUAD #1-4, SUPER HERO SQUAD #1-2, AVENGERS: THE INITIATIVE FEATURING REPTIL and material from MARVEL SUPER HERO SQUAD: HERO UP!