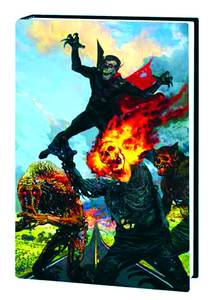 The acclaimed creative team behind MARVEL ZOMBIES 3 returns...with another adventure that takes place in the Marvel U! The vampire. The witch. The werewolf. The muck-monster. The devil. They're nobody's idea of heroes, but they're all that stands between our world and an unstoppable apocalypse! They're the new Midnight Sons, and their quest to track down the undead who escaped from A.R.M.O.R. will lead them around the globe-and right to a cruise ship overrun with undead undersea-dwelling cannibals! Can this monstrous team stop the "red tide" before it unleashes untold horror upon the mainland? Not if the Merc With Only a Mouth has anything to say about it! Yes, writer Fred Van Lente and artist Kev Walker-the guys who made IGN.com say "MARVEL ZOMBIES 3 may actually rank as the best in the series"-are back again, unleashing the flesh-eaters for another roller coaster ride of gore, action, gore, thrills, gore and gore! Collecting MARVEL ZOMBIES 4 #1-4.