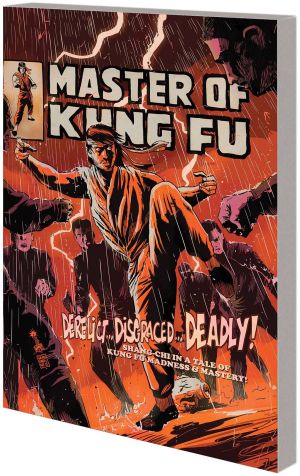 Welcome to the mystical land of K'un Lun, where the study of martial arts reigns supreme! But in a world where everyone's hands are deadly, what becomes of a drunken dropout like Shang-Chi? Emperor Zheng Zu's word is law in this Battleworld realm, and once the Thirteen Chambers open - it's time to determine who is the Master of Kung Fu! Shang-Chi, a wanted murderer, has taken a vow of peace and found a new home with the Lower Caste. But to topple the despotic emperor, he must fight once more! Can Shang-Chi elude adversaries like the Laughing Skull long enough to confront his ultimate enemy - the man he once called father?! Plus: a tale from 17th-century Japan featuring a mysterious Ronin, the Incredible Monk! Collecting MASTER OF KUNG FU (2015) #1-4 and 5 RONIN #2.