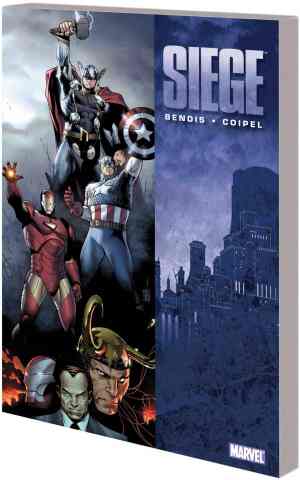 The lines have been drawn in final battle! In an epic story arc that began with Avengers Disassembled - and extended through the House of M, Civil War and Secret Invasion - the greatest villains of the Marvel Universe are ready to make their final move against a target from time immortal: the hallowed halls of Asgard! But with this the last piece in Norman Osborn's insane bid to seize total control of the world, is the siege of Asgard the proverbial bridge too far for the former Green Goblin? And will his machinations with Loki be the thing which loses the war, or wins him the world? With all-out action that explodes across artist Olivier Coipel's (Thor) gorgeously rendered pages, writer Brian Michael Bendis (New Avengers) fulfills the promise of a story years in the making - starring Captain America, Iron Man, Thor, Nick Fury and other greats of the Heroic Age! Collecting SIEGE #1-4, SIEGE: THE CABAL, SIEGE PROLOGUE and FREE COMIC BOOK DAY 2009.