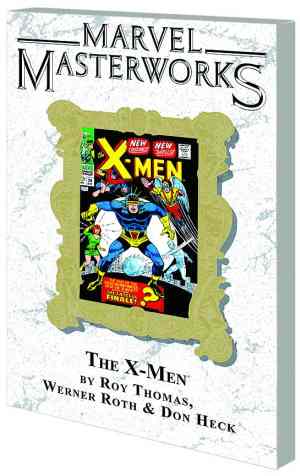 Here comes the next hit from the MARVEL MASTERWORKS juggernaut! Collecting the original tales of Marvel's merry mutants, we have milestone after milestone prepared just for you, and it all starts off - of course - with the Juggernaut! That's not the only earth-shaking tale in store, though. There's the X-Men vs. Spider-Man, an underworld battle against the Mole Man and Tyrannus, an encounter with the Frankenstein monster, and the culmination of the Factor Three epic featuring the Changeling and the unbelievable Mutant Master. Also featured are the "Origins of the X-Men" backup strips revealing the beginnings of Professor X and his teen mutant team supreme! And we're not afraid to go out with a bang. That's right: On top of the X-Men's cool new costumes, in our heart-wrenching conclusion the brutal beast Grotesk kills Professor X before the eyes of Cyclops and his teammates! You'll have to read it to believe it - so reserve your copy today, True Believer! Collecting X-MEN (1963) #32-42.