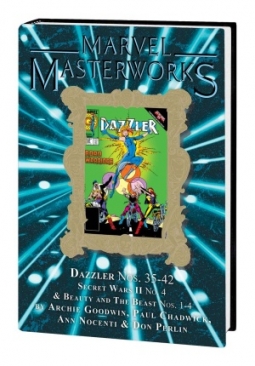 Dazzler, that's a wrap! The icon of the '80s finishes her tour with the Marvel Masterworks in the conclusion of her original series! Alison Blaire took her last solo bow in 1986, but while Madonna was notching #1 singles, Dazzler was getting chased through sewers by super villains. Being the hardest-working mutant in show business isn't as glamorous as you'd think! And with a prejudiced world now fully aware of her mutant status, Dazzler's singing career is at a standstill. She desperately tries to find her place as she faces the cosmic Beyonder, battles her future X-Men teammates, romances the Beast and tries her hand atroller derby?! Hey, it was the '80s! Featuring early work from indie legend Paul Chadwick! Collecting DAZZLER #35-42, BEAUTY AND THE BEAST #1-4, SECRET WARS II #4 and material from MARVEL FANFARE (1982) #38.