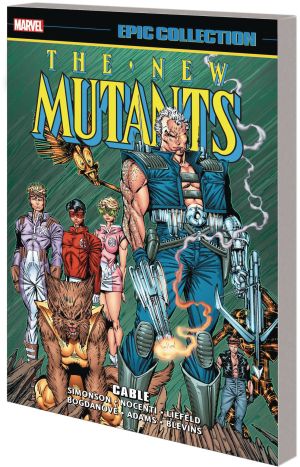 Watch out, New Mutants - here comes the man called Cable! With the rest of the team in Asgard, Freedom Force arrests Rusty and Skids. The terrorist Mutant Liberation Front demands their release, but a mysterious metal-armed, gun-toting warrior with a glowing eye is targeting the MLF for reasons of his own! The New Mutants make the dangerous passage back to Earth, but soon cross paths with Cable - and their lives will never be the same! The forceful reinvention of the New Mutants begins here as Professor X's former students join Cable to tackle threats including Sabretooth, Skrulls and the shadowy Stryfe! Plus: The New Mutants battle Atlanteans, face their futures and tune in to TV land! Collecting NEW MUTANTS (1983) #86-94 and ANNUAL #5-6, NEW MUTANTS SUMMER SPECIAL #1 and material from X-FACTOR ANNUAL #5 and X-MEN ANNUAL (1970) #14.