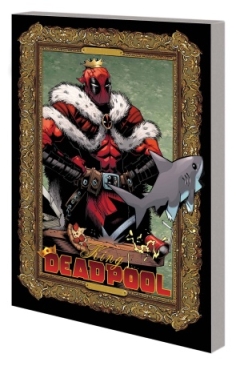 Hail to the King! Deadpool's unlikeliest career change yet sees him dethrone the King of Monsters - and become the Merc with a Monarchy! His new kingdom? Staten Island - the place where monsters dwell! But his royal highness soon finds himself neck deep in political intrigue - and facing major obstacles including Captain America and the monster-hunting Elsa Bloodstone! Uneasy lies the head that wears a crown - and Wade will learn that lesson firsthand when Kraven the Hunter arrives with regicide on his mind! But when Elsa learns she's dying, why is Deadpool the only one who can save her? Learn the truth of the Bloodstone curse as action, adventure and a dimension full of hideous goo await! Plus: Wade invades the X-Men's island-nation of Krakoa - and King Deadpool takes on the King in Black! Collecting DEADPOOL (2019) #1-10.