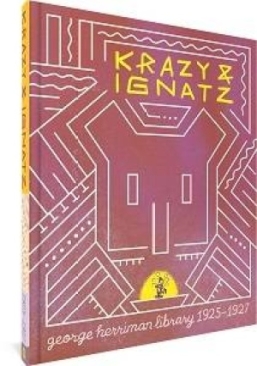 Meticulously and lovingly restored, this exquisite, generously sized volume collects the acclaimed and groundbreaking Krazy Kat Sunday strips of 1925, 1926, and 1927. This Eisner Award-nominated series showcases one of the most renowned and celebrated comic strips in the art form's history as it strides boldly through the mid-1920s, its quirky characters in full flower in this gorgeous, archival hardcover collection. In this volume: Ignatz repeatedly sets elaborate traps for Krazy (long before the Road Runner), adventures on the 'enchanted mesa,' wacky weather, literal cliffhangers - and what happens when Santa and the stork arrive at the same chimney at the same moment? BONUS: The most complete collection of Herriman's long-lost Book of Magic pages ever assembled. With incisive essays by Herriman scholars, this entry in our ongoing series makes it plain to Herriman fans and newcomers alike why historians, scholars, and cartoonists consider this to be the best comic strip ever created and why The Comics Journal proclaimed it to be 'the greatest comic strip of the 20th Century.' Krazy Kat is an ongoing story of a (head-) achingly unrequited love triangle. Krazy adores Ignatz, who returns that affection by launching literal bricks at Krazy's cranium. Offisa Pup loves Krazy and seeks to protect 'her' (Herriman always maintained that Krazy is genderless) by tossing Ignatz in the pokey. With this deceptively simple structure, Herriman builds entire worlds of meaning into the actions, building thematic depth and sweeping his readers up with the looping verbal and visual rhythms of his characters' unique dialogue and his loopy, ever-shifting surrealistic backgrounds.