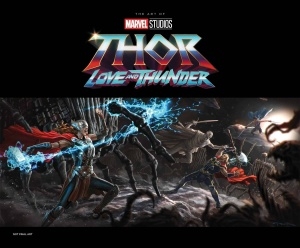 MARVEL STUDIOS' THOR: LOVE AND THUNDER finds the God of Thunder on a journey unlike anything he's ever faced - one of self-discovery. But his efforts are interrupted by a galactic killer known as Gorr the God Butcher, who seeks the extinction of the gods! To combat the threat, Thor enlists the help of King Valkyrie, Korg and ex-girlfriend Jane Foster, who - to Thor's surprise - inexplicably wields his magical hammer, Mjolnir, as the Mighty Thor! Together, they embark upon a harrowing cosmic adventure to uncover the mystery of the God Butcher's vengeance and stop him before it's too late. Continuing their popular ART OF series of movie tie-in books, Marvel Studios presents another blockbuster achievement! Featuring exclusive concept artwork and in-depth interviews with the creative team, this deluxe volume provides insider details about the making of the highly anticipated film.