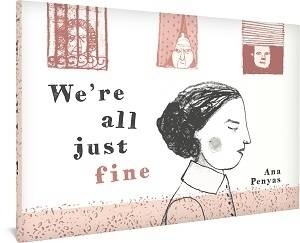 This heartfelt graphic biography is a tribute to the artist's grandmothers and a generation of women who quietly soldiered through over forty years of Fascist rule in Spain. Artist Ana Penyas's grandmothers Maruja and Herminia live alone in their respective Spanish towns, largely neglected by their children and relatives, who never visit. But when Ana comes to see them, she realizes that these women, whose day-to-day existences now seem mundane, experienced firsthand an incredibly tumultuous and fascinating period of Spanish history. In We're All Just Fine, Penyas weaves the memories of her grandmothers to craft a narrative quilt that pieces together what it was like for women to assimilate to Spain's dramatic political and cultural shifts in the late 1970s and '80s. The sudden transition from the authoritarian, repressive Franco regime to lively and liberating democracy was at once incredibly freeing but also destabilizing for women used to their traditional roles as dutiful housewives. Through this intimate lens into her grandmothers' daily struggle - of their silence, the small acts of rebellion, and great gestures of resilience - Penyas gives voice to an entire generation of 'invisible'' women whose stories have rarely been told. Combining collage and rough-hewn pencil drawings, and mixing past and present, Penyas offers a decidedly feminist tribute to the forgotten lives and legacies of her grandmothers.