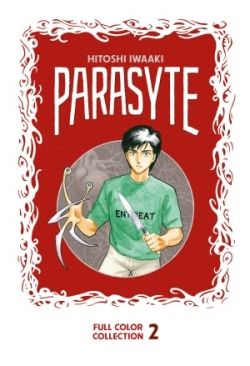 The sci-fi horror manga classic returns, in a fully-colorized, premium-quality hardcover for the first time! If you've never read the story of Shinichi and the polite and murderous alien infesting his right arm--or even if you already own the series--there's never been a better way to collect it. Presented in eight volumes containing about 300 pages of manga each. They arrive in silence, out of dark skies. They infest human hosts and consume them. And they are everywhere. They are Parasites: alien creatures who must invade and take control of human hosts to survive. Once they have infected their victims, they can twist the host's body into any abominable shape they choose: craniums splitting to reveal mouths of sharp teeth, batlike wings erupting from backs, blades tearing through soft hands. But most have chosen to conceal their lethal purposes behind ordinary human faces. So no one knows their secret, except an ordinary high school student. Shin managed to arrest the infestation of his body by an alien parasite, but can he find a way to warn humanity of the horrors to come? For more than 30 years, new generations of readers have been riveted to this unlikely buddy story that unfolds amid a world of monstrosities that never stay hidden for long. Since its first release, in 1988, Parasyte has inspired live-action films, spinoffs, and, in 2015, a global hit anime series. The Full Color Collection presents Hitoshi Iwaaki's original manga in hardcover for the first time, with each page carefully colorized and a revised translation for 2022. There's never been a better time to stay up late and get your hand on Parasyte!