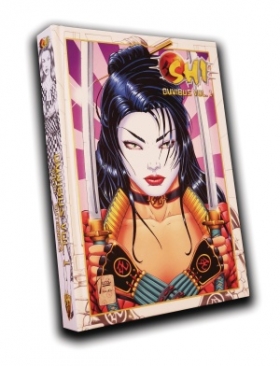 For the first time ever, SHI the masterwork of award-winning creator Billy Tucci, and the series that literally changed the face of comics and launched the Bad Girl" revolution returns in this premier formatted, 488+-page hardcover edition! This modern-day samurai saga introduces the story of Ana Ishikawa, a young woman born of two cultures and drafted into a shadow war that has existed for over 500 years. In this complete omnibus, we follow Ana as she begins her violent assault on the Yakuza Oyabun Masahiro Arashi. But after several fiery clashes and witnessing the grieving children of those shes slain in battle; Ana turns away from the sword. Soon, the hunter becomes the hunted as Arashi seeks his own revenge against this faceless assailant and his answer is the centuries-old enemies of Anas Kyoto Sohei (descendants of the medieval warrior-monks), the Narans, led by her best friend, the sociopathic assassin Tomoe! Heartbreaking twists and exhilarating turns ensue as Anas mission unravels into one of blood and madness and whose culminations only salvation is mercy and forgiveness. Originally brought to you by legendary creators Billy Tucci, Peter Gutierrez, Barry Orkin, Michael Bair, Gary Cohn, Dan Mishkin, Jimmy Palmiotti, Amanda Conner and more, Crusade Comics has spared no expense in delivering you this incredible collection. Every story page has been digitally re-mastered from the original comic book pages and is also chock-full of extra content! The Shi Omnibus collects all 12 issues of Shi: Way of the Warrior, the three-part interlacing Tomoe miniseries, and the 48-page, Shi vs. Tomoe celebrating the 25th Anniversary of this epic crossover classic that ran from 1994-1996! "