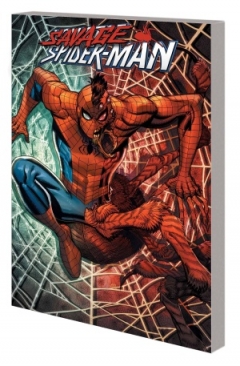 Out of the pages of NON-STOP SPIDER-MAN comes something differentsomething savage! Peter Parker has gone through a horrifying transformation - one that has left him more spider than man. Far from his friendly neighborhood, the animalistic Spider-Man finds himself in a terrifying jungle - where he soon becomes the leader of a tribe of monstrous victims just like him! But with a terrifying global conspiracy on one side and the lethal Baron Zemo on the other, can a barely human Peter somehow find a way to fight to the surface? And if he does, can he face himself after all he's done as a monster? As the truth about the Immaculatum is revealed, Peter may give in to his savage side forever. Collecting SAVAGE SPIDER-MAN #1-5.