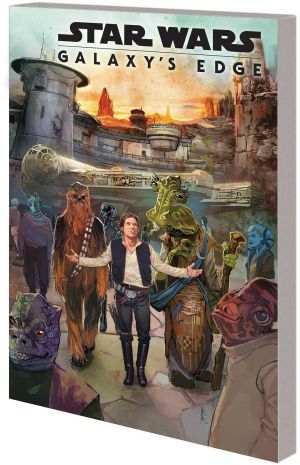 A thrilling call to adventure on the very edge of the galaxy! Black Spire Outpost has long been frequented by smugglers, merchants and travelers from every system looking to make their score on the infamous black market - or experience exotic thrills only the remote world of Batuu has to offer. Beings like the infamous Dok-Ondar, proprietor of rare antiquities, thrive on the unique opportunities that abound on this lawless outpost at the edge of Wild Space. But the First Order has come to Batuu - and now its survival is at stake! The road to Black Spire's salvation begins in the past, with a job that Han Solo and Chewbacca once pulled for Dok-Ondar! The newest chapter of the growing Star Wars saga begins with this riveting tie-in to the themed land at Disneyland and opening later this year at Walt Disney World! Collecting STAR WARS: GALAXY'S EDGE #1-5.