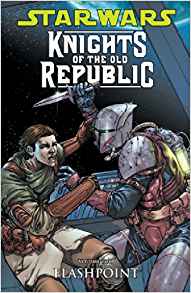 Nearly 4,000 years before the Death Star, fugitive Padawan Zayne Carrick's quest to clear his name for the alleged murder of his fellow Jedi-in-training brings him head to head with the galaxy's most feared fighting force - the Mandalorians! Along with a petty crook named Gryph and Elbee the grouchy droid, Zayne is a passenger aboard the Last Resort, a renegade ship piloted by the senile genius Camper and his fierce protector Jarael. Together, this motley crew will face kidnappings, hijackings, maniacal scientists, Mandalorian traitors, bumbling bounty hunting brothers, and a few really big explosions.