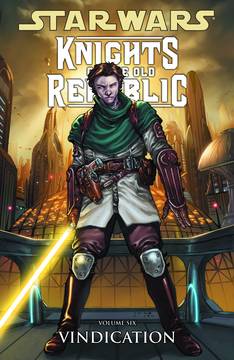 Fugitive Padawan Zayne Carrick's quest to clear his name is finally concluded in this novel-length story! Zayne and his con-artist companion Gryph commit to a new course in exposing the dark actions of the secret Jedi Covenant. Yet doing so takes them not only to the homeworld of one of Zayne's murdering Masters, but into the most highly guarded place on the planet-a storehouse of Sith artifacts! But his days as a renegade won't end there! Zayne's search for justice will continue to Coruscant, where he'll confront his Master, Lucien Draay, and the members of the Jedi Covenant in a showdown that will end his days as a fugitive in one way . . . or another. o Continues the story set nearly four thousand years before the rise of the Empire and the fall of Anakin Skywalker (and seven years prior to the events in the Knights of the Old Republic video game).