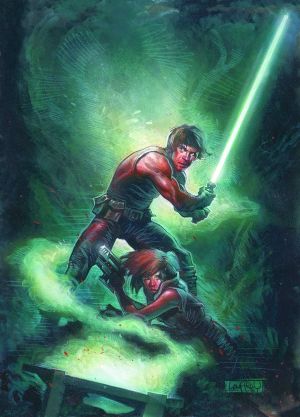 Five years after the fall of the Empire, Luke Skywalker is the first in a new line of Jedi Knights. Han Solo and Princess Leia have married, together assuming many burdens of the New Republic's government. But across the galaxy lies a dying part of the Empire-all the more dangerous near death-and it has just discovered something that could bring it back to life! The last of the Emperor's warlords, Admiral Thrawn, is ready to destroy the New Republic-and the odds are stacked heavily against Luke, Leia, and Han!
o Star Wars: The Thrawn Trilogy collects the adaptations of Timothy Zahn's Heir to the Empire, Dark Force Rising, and The Last Command. This Star Wars hardcover edition is a must have!