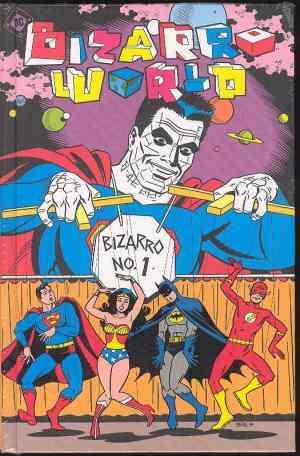 Where else could the world's greatest alternative cartoonists run rampant through the DC Universe in an all-new anthology of utterly unhinged stories and art? It could only happen in the BIZARRO WORLD! This big slab o' comics features work by many of the fantastic creators who worked on the BIZARRO COMICS book (and made it an award-winner)! This time the contibutors weaving strange and wonderful tales about the quirky Bizarro include Tony Millionaire, Kyle Baker, Evan Dorkin, Dylan Horrocks, Harvey Pekar, James Kochalka, Peter Bagge, Scott Morse, Ben Dunn and a host of others, along with some double-secret surprise guests! All this, topped off with a cover by Jaime Hernandez! It's big! It's indisputably rectangular! It stays crunchy even after you pour on the milk!