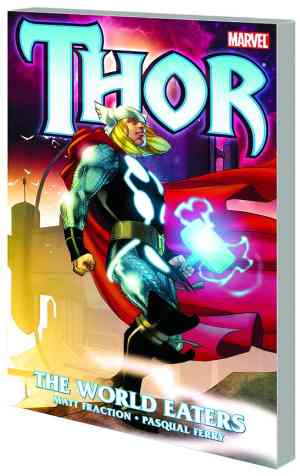 Asgard lies in ruins. Balder the Brave has proven his mettle as a warrior, but is an uncertain king; his people rightly wonder whether they can endure one more turn of bad luck. So the last news they need to hear is that a trans-dimensional force of implacable evil is headed their way. The World Eaters have learned that Asgard has abandoned its place in the natural order of the Nine Worlds and now resides in the skies above Oklahoma, and they aim to take it - but that's not the last claim they plan to stake. As they ravage Alfheim, Muspelheim and the other branches of the World Tree, Thor must stir his family of gods to action to face a most dire threat, at a time when they simply have no margin for error. Collecting THOR (1966) #615-621 and #620.1.