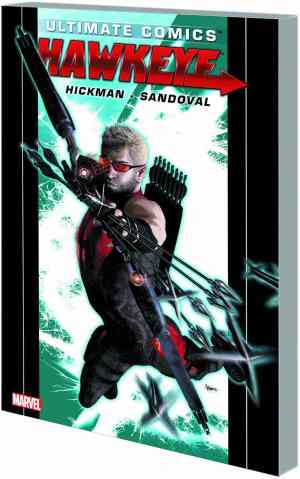 From the pages of ULTIMATE COMICS ULTIMATES comes Ultimate Hawkeye! Nick Fury faces a trio of impossible, earth-shattering crises. With S.H.I.E.LD.'s forces divided across the globe, there's an urgent mission only one man can handle. The Ultimates' resident bad boy - Clint Barton, a.k.a. Hawkeye -  will have to infiltrate deep into the Southeast Asian Republic to deal with civil unrest that threatens the future of mutantkind - but he won't be going it alone. Under his command are the mysterious and untested mutants of Ultimate X, and the even more unpredictable Hulk! They say Hawkeye never misses - but there's a first time for everything! Collecting ULTIMATE COMICS HAWKEYE #1-4.