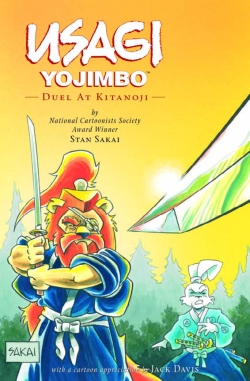 Nothing comes easy for rabbit ronin Usagi, not even being a spectator at the planned duel between his former teacher Katsuichi and Katsuichi's  rival Nakamura Koji.  Before the duel even begins, Usagi becomes embroiled in a dispute between Koji and a local fencing school.  Along the way, Usagi discovers a devastating secret - a weakness in Koji's style.  It's a secret that could save his teacher's life, but at the cost of his own honor. This 17th volume of Usagi Yojimbo collects issues #43-60, including the entire "Duel at Kitanoji" story, and a handful of other great shorts. And, as a special treat for our longtime fans, this collection features-for the first time!-preliminary sketches and designs by Sakai. With an appreciation by MAD magazine cartoonist  Jack Davis!