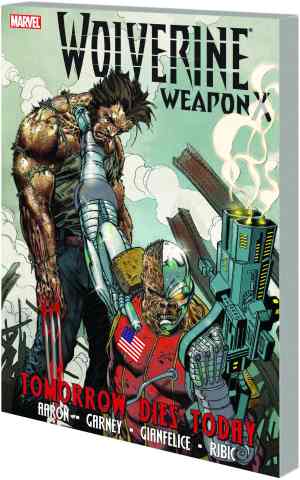 Fight the power! The future is controlled by the malevolent mega-corporation known as Roxxon - which keeps its tight grip on society through the use of murderous cyborgs, the Deathloks, tasked to exterminate all who would stand against them. The last bit of resistance is a ragtag paramilitary group that includes Logan, the man known as Wolverine. Now, the Deathloks have begun appearing in the present, as well, seeking out current and future vigilantes - and neutralizing them with extreme prejudice. After warming up with some less-threatening opponents, the next name on their list is none other than Captain America. To prevent Roxxon's rise and the eventual slaughter of the world's heroes, Wolverine must join forces with a mysterious woman possessing unexplained knowledge of the coming dystopia. He won't give up until the Deathloks are stopped, but what hope is there to prevent a future already come to pass? Collecting WOLVERINE: WEAPON X #11-16 and DARK REIGN: THE LIST - WOLVERINE.