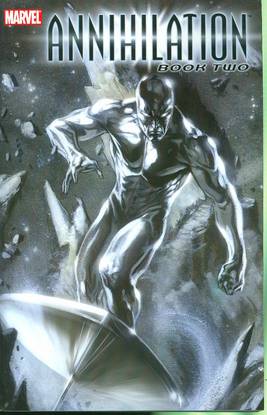 A gathering of forces! The Annihilation Wave has scoured the galaxy for the one-time heralds of Galactus - forcing the Silver Surfer to seek out his former master and prepare for a cataclysmic battle with primordial foes! As the Annihilation Wave spreads into Kree and Skrull space, witness the Super-Skrull's personal quest to combat Annihilus from the Negative Zone for the life of his son! And the recently ousted Ronan the Accuser sets to clear his name, only to come face-to-face with an army of powerful women led by Gamora! Meanwhile, Thanos and Annihilus have forged an alliance - but what do they seek? Collecting ANNIHILATION: SILVER SURFER #1-4, ANNIHILATION: SUPER-SKRULL #1-4 and ANNIHILATION: RONAN #1-4.