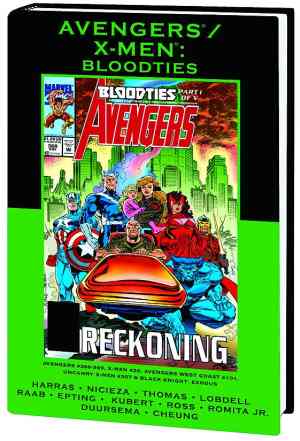 The island of Genosha has been a powderkeg since the X-Men overthrew its anti-mutant regime, and it's finally erupted into full-scale civil war! The president asks Professor X to mediate peace between human and mutant, but the situation is inflamed when Magneto's treacherous Acolyte Fabian Cortez makes a bid for power by kidnapping Luna, daughter of the Avengers' Quicksilver and Crystal - and Magneto's granddaughter! The X-Men and Avengers head for Genosha - but the situation spirals out of control when Magneto's right-hand man, Exodus, arrives looking to kill Cortez! Can even the X-Men and Avengers combined bring peace to a nation at war, defeat two madmen and save a child caught in the middle? Plus: the secret origin of Exodus and his twisted ties to the Avengers' Black Knight! Collecting AVENGERS (1963) #368-369, X-MEN (1991) #26, AVENGERS WEST COAST #101, UNCANNY X-MEN (1963) #307 and BLACK KNIGHT: EXODUS.