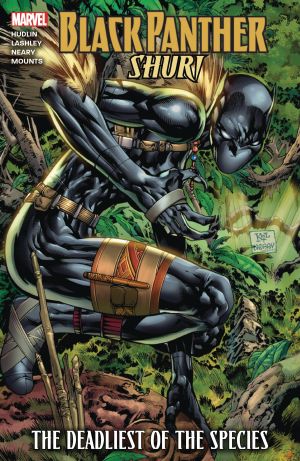 Who is the Black Panther? After attending a secretive, mysterious meeting, T'Challa - the current Black Panther and ruler of Wakanda - returns home with severe injuries and locked in a comatose state. With no leads on who attacked her husband or why, Queen Ororo is thrust into a position of leadership. While Ororo is tasked with ruling Wakanda, another task of dire importance awaits her. Though Wakanda is a powerful nation, its power comes directly from its leader, the Black Panther - and in the event that T'Challa doesn't emerge from his coma, Storm must choose her husband's successor. And as this brave soul embarks on the dangerous ritual to become the new Black Panther, the stakes have never been higher. An unstoppable force is headed toward Wakanda: Morlun - Devourer of Totems - is back, and he's hungry! Collecting BLACK PANTHER #1-6.