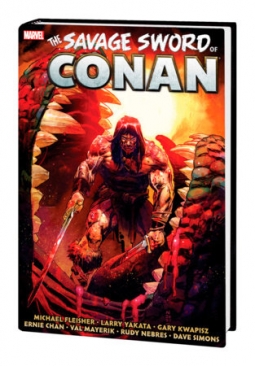 Few, if any, comic magazines have had such an abundance of amazing artists as SAVAGE SWORD OF CONAN! This eighth Marvel Omnibus edition is proof positive, with work by a host of talents including the iconic energy of Ernie Chan, the flowing beauty of Rudy Nebres and the airbrushed action of Dave Simons. And the Conan artist of all Conan artists, Big John Buscema, illustrates the never-before-reprinted adaptation of Conan the Destroyer! Amazing new talents join as well, with Gary Kwapisz crafting a new visual pace for the magazine. Conan's exploits in this volume include the return of Captain Bor'aqh Sharaq, the resurrection of the Devourer of Souls and all-out war with an undead army! Collecting SAVAGE SWORD OF CONAN (1974) #102-116 and MARVEL COMICS SUPER SPECIAL #35.