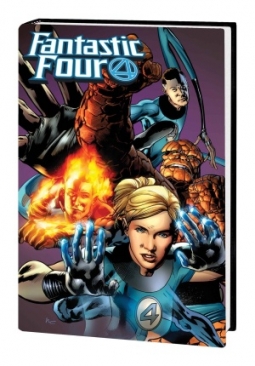 The acclaimed creative team behind THE ULTIMATES tackle Marvel's First Family! Mister Fantastic's old flame Alyssa Moy returns, warning of a worldwide calamity only Reed can help avert - but will the price be his marriage to Sue? A new team calling themselves the Defenders are barraging New York with high-velocity attacks. Where (or when?) are they from, and what is their desperate mission? And who is the monstrous foe that even Victor Von Doom bows to? Prepare for terror when the FF confronts the Master of Doom! Secrets are revealed, worlds are created and destroyed and one among the Fantastic Four will die! Plus: Can the Fantastic Force restore a devastated future? And how are Marvel villains roaming the real world circa 1985?! Collecting FANTASTIC FOUR (1998) #554-569 and ANNUAL #32, FANTASTIC FORCE (2009) #1-4 and MARVEL 1985 #1-6.